When we arrived in Myanmar, we thought at first that we flew on a time machine back to the past: A few days ago we enjoyed the so convenient comforts of modern South Korean cities, and suddenly we found ourselves between bamboo huts, bullock carts and begging monks. 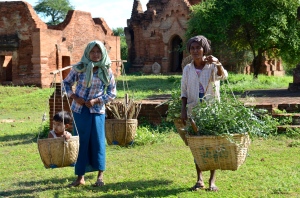 Myanmar is actually one of the poorest countries in the world. Until recent years, the borders were still closed. Tourists were not allowed to visit the country. Gradually, the country has now opened to tourism. In the meantime, Coca Cola is everywhere to buy, ATMs are now available in every town, and mobile and Internet are widely used (in modest quality) in the tourist centers. As a tourist, you feel very comfortable and welcome: The people in the „Golden Land“ treat foreigners extremely friendly, respectful and courteous. 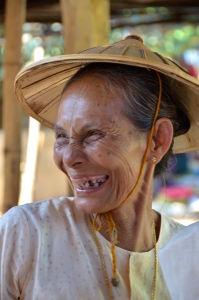 Only the infrastructure requires some improvements. Despite the ever-growing tourist flows, the country is not dominated by mass tourism yet. However, it will probably take only a few years until the country has lost its „innocence“ and originality: high-rise buildings, shopping malls, luxury hotels etc. are popping up like mushrooms! Since the borders were opened, dozens of foreign companies are making big business and invest high amounts of money in Myanmar. It’s a matter of time before the bullock carts are being replaced by tractors and the colorful village markets must give way to the modern shopping malls. Of course, the country needs progress – the hygienic conditions are catastrophic, some people still seem to live in the Middle Ages, and in terms of education, a huge catch up is needed. The problem is simple: the recent changes happened almost too fast and many people cannot deal with it and are overstrained with the progress. Another problem is the political unrest: In many areas there is a civil war – there are over 130 different tribes living in Myanmar, and it will take a long time (if ever possible) that they will unite into one country. These political unstable areas (estimated 70% of the country) may not be visited by tourists because it is still too dangerous due to the political tensions. (Unbelievable that in a country with almost 2000 km of coastline, only 5 beaches are accessible to foreigners …) In these areas, there is also – what a surprise – great poverty.

Despite the problems in the country, everywhere is smiling, people are very patient, tolerant and seem to be very happy. This is surely a result of Buddhism and highly respected old traditions. Old and young wear mostly the „Longis“ (a long kind of skirts), and women and children put every day a special kind of „make up“ on their faces: this make up is an ocher paste from a special tree bark (Tanaka). It is used as an aesthetic as well as a skin- and sun protection. Everything in Myanmar is still very original and genuine. The Buddhist monks, encountered daily on the streets, are treated very respectfully. They never have to beg for donations: on the contrary, is the „donator“ who feels grateful if he can donate something to the monk. 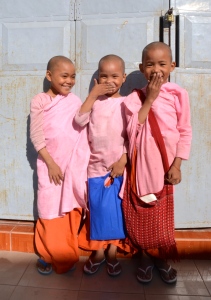 The importance of Buddhism is also reflected in the numerous monasteries, temples and pagodas, which can be seen throughout the country. If you live close to monasteries, you will be day and night exposed to continuous monotonous prays out of loudspeakers. While Vero and I would have liked to cut the speaker cables, this „noise“ seems not to disturb the Buddhists in any way. There is virtually no crime (and accordingly we always felt very safe) in Myanmar: Again, this is most likely due to the religion.

On our trip through Myanmar, we initially selected the classic tourist route: in Yangon, the former capital, we visited all the beautiful Buddha statues, pagodas and temples. The same in Bagan: The ancient temple ruins in the town are very spectacular at sunrise and sunset, really a highlight that no one should miss.

Inle Lake with its floating gardens and the „one leg rowing“ fishermen is also very attractive. And the city of Mandalay (Mandalay, the name sounds just wonderful!) Is nothing special – unless you visit the various suburbs with their beautiful bridges, temples and pagodas.

And, to be more precisely, one of these suburbs is Sagaing Hill. Here we got „stuck“. With Sabine and Katja, our two German travel friends, we visited these suburbs and more or less by coincidence we visited a sort of monastic school for orphans and children from poor backgrounds. At first, the numerous little laughing novices and nuns have catched us immediately. But soon after we realized that this school, led by a Buddhist monk, is actually a place where lots of good and important work is being done: without that school, over 2,000 children would have an uncertain future. Here they get a roof over their heads, food, and – the most important – free education! To make it short: Vero and I have decided to return for the remaining two weeks of our holiday in Myanmar to this school and help here in different areas, especially as English teachers. And this led to the most beautiful adventure of the trip so far! (More on this in the article „Do good and talk about it …“)